So many people believe that flying is too expensive, too hard, or takes too much time to learn how to do. Those people probably haven’t yet experienced powered parachutes. Powered parachutes are a way to experience the sky and offer a freedom that few other endeavors can. And just when you think it can’t get any better, you can actually share the dream with others by taking them along legally and safely.

This book is meant to be a practical textbook to help you not only learn to fly, but to help you earn your FAA sport pilot certificate for powered parachutes. This book contains not only the information you need to know, it actually brings together resources from many locations and integrates them into the one resource you can depend on to prepare you for not only your knowledge test, but also your FAA practical test. Standards are presented, cross-referenced, and explained so that training is easier and your check ride becomes a far less stressful affair.

Based on over twenty years of experience in the sport, Roy Beisswenger has put together a resource that most powered parachute pilots wished they had when they were learning to fly. Just as important, as the first FAA sport pilot designated examiner in the country and the only FAA Gold Seal Flight Instructor in the sport, he knows where students stumble and what they need in a textbook. This is the result of those years of experience.

If you want the one resource that you can depend upon through your flight training experience, you need this book! Images from the Book 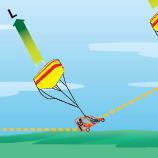 Roy's Powered Parachute Book is a new book for 2015. We look forward to hearing about your experiences with the book. Use the online form to contact us and let us know what you like along with any tips for improving future editions!

Roy Beisswenger is a Titan in Light-Sport Aviation and it’s no wonder by his strong drive to contribute, desire to impart wisdom and results-oriented approach. He has a creative yet disciplined mind which is turbo charged by his tremendous energy and commitment to deliver excellence in everything aviation. Roy is an impressive and inspirational guy with solid values, thirst for learning, as well as teaching. I’ve learned much from just being around him. We consider “Roy’s Powered Parachute Book” to be the gold standard in training and are using it for our own flight training operation.

I have been a flight instructor for many years, beginning with airplane and moving on to powered parachutes. For the longest time, there just wasn’t a good training manual for powered parachutes, certainly nothing of this caliber. I’ve had the opportunity to work with this manual with students and have found that its powered parachute focus, along with the great graphics, help students learn and retain the information better. This has resulted in better results for students taking the Sport Pilot Powered Parachute Knowledge Test. Even more important, the book keeps everything between two covers and is well cross-indexed with the FAA Practical Training Standard. This makes it the best book a pilot applicant could ask for when preparing to take his or her check ride.

I have read and gone through this book. As a CFI flight instructor for powered parachutes, I find it to be very comprehensive and complete. It has all a pilot would need to know about flying powered parachutes. It also covers maintenance, which is not covered in the usual FAA powered parachute books used by CFI's. This book replaces a stack of 5 books, and makes my training go a lot smoother, because a student knows they need only read this 1 book. It will also be a help for experienced pilots as well. The illustrations are top notch. This is a great addition to any powered parachute pilot's library of reference books.

Send us your experiences:

Roy Beisswenger is based in Greenville, Illinois, where he has operated the Easy Flight powered parachute training school since 1993. Before the Sport Pilot rules were introduced in 2004, he held the designation of Ultralight Flight Instructor-Examiner (UFI-E) with the Experimental Aircraft Association (EAA) as well as Advanced Flight Instructor (AFI) with the United States Ultralight Association (usua). He has trained local pilots, equipment dealers and students from other countries as well as US military members.

In late 2004, Beisswenger was chosen to participate in the Federal Aviation Administration’s first Designated Pilot Examiner (DPE) training class for the sport pilot program. In January of 2005, he was the first to receive the designations of Sport Pilot and Certified Flight Instructor-Sport Pilot (CFI-SP) for powered parachutes. There he also became one of the country’s first two DPE’s for powered parachutes as well as one of the country’s first Designated Sport Flight Instructor Examiners. He is also the first sport pilot flight instructor to become an FAA Gold Seal CFI.

Before Sport Pilot, Roy assembled aircraft from kits and serviced them for his school and customers. In 2006 he became a Repairman, Light Sport Aircraft Maintenance with the designations for airplane, powered parachute and weight shift control aircraft. He has also become a designated airworthiness representative for those same categories of aircraft.

Beisswenger is also involved in industry organizations. He became a board member of the United States Powered Parachuting Association, which evolved into the North American Powered Parachute Federation. He remains there as an at-large director, a position that represents and is elected by members across all of North America. Roy is a board member of the United States Ultralight Association. He also served as president of the Illinois Ultralight Advisory Council (IUAC), which advises Illinois state as well as federal officials on light sport aviation issues. The IUAC also conducts the largest sport aviation safety seminar in the US on an annual basis, attracting approximately 400 participants a year.

Beisswenger is president of the USUA as well as the United States delegate to CIMA, the committee of the Fédération Aéronautique Internationale (FAI) pertaining to Microlight activity around the world. There he has helped set competition and record setting policy for the sport on a world-wide basis. He was also a Steward for the 10th World Microlight Championships held in Levroux, France in 2005. He served in Spain in 2012 as President of the Jury for the FAI World Paramotor Championships. He also serves on an international expert group for FAI pertaining to regulations.

The Light Aircraft Manufacturing Association (LAMA) presented Roy with their President’s Award in 2014 and later asked him to become a member of the Board of Directors.

Beisswenger has written for many of the ultralight and light sport aircraft magazines. His articles have appeared in UltraFlight Magazine and the EAA Experimenter, where he was a columnist. Stories have also appeared in Ultralight Flying! as well as the Australian magazine, Pacific Flyer. He wrote about one quarter of the FAA’s Powered Parachute Flying Handbook and helped edit the rest of the document. His chapter on powerplants was the first official document ever produced by the FAA for the two-stroke engine. He now also writes and helps edit the monthly magazine, Powered Sport Flying.

Prior to his work in aviation, Beisswenger was schooled in Mechanical Engineering, graduating from Washington University in 1984. Following that, he went to work as an officer in the US Army.